People in individualistic societies seek life satisfaction in self-realization, developing personal qualities and achieving individualistic goals. Intelligence might be an undeniably useful resource in such efforts, as it determines many outcomes associated with life success, such as wealth, educational achievements, health and longevity. In collectivistic cultures, satisfaction results from social affiliation and being a part of community remains the main point of reference. Achieving individualistic goals is then probably not sufficient for attaining satisfaction in such societies and intelligence, accompanied by elevated wealth, appear to be less valuable resources, at least from a life satisfaction standpoint. Thus, cultural specificity should be taken into account in the research on implications of country aggregate IQ. 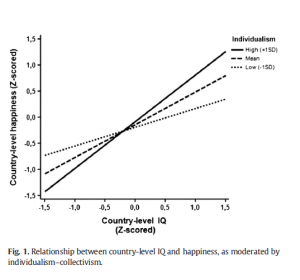